Through this icon, let us contemplate the Mystery of the Incarnation

The entire Creation is called together to celebrate this great mystery. God becomes man to renew and reconcile all Creation from within … an inside story of the chapel at the Domus Emmanuel in Paris, (France).  An explanation by Father Dominique-Marie David.

Domus Emmanuel is where most of the main missionary services of the Emmanuel Community are gathered (89-91 boulevard Auguste Blanqui, 75013 Paris, France). In the basement, there's a lovely little chapel. The chapel is open between 9am and 6pm for those who want to come and pray. You are welcome to join us (adoration, praise from Monday to Friday at 9am and the Eucharist is celebrated [almost daily] at 12noon)!

If this chapel is above all a place of silence, of an encounter with the Lord, of personal and community prayer, it is fundamentally a place of welcome. In this place, we are welcomed by God Himself. It is not only those who designed this chapel, but also the Lord who wants everyone to feel welcome, whether they come alone, in small or bigger groups. In fact, when we are gathered here, we are not only just side by side, but gathered together.

The Mystery of the Incarnation 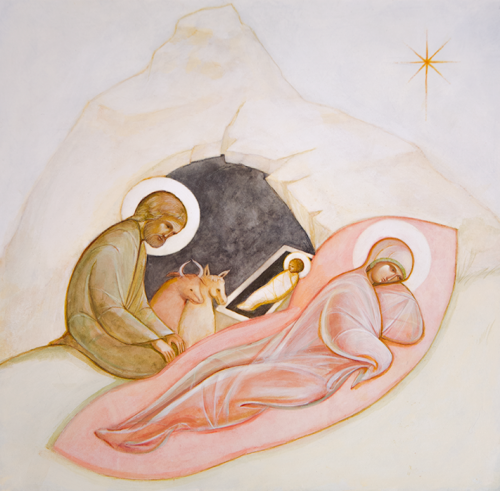 Let's face it: this fresco is a bit surprisingly different for some! This way of representing the Nativity is quite traditional in the Byzantine iconographic tradition. However, the scene has been adapted: most of the time, Mary and Joseph are separated.
To understand, it must be said that what you see is not strictly a representation of Christmas (or not only), but a door open to the mystery of the Incarnation. In the West, we like to deal with events that are well located chronologically and geographically  (what is the event? where did it happen? when did it happen?). And we would like to have the "real Christmas" in front of us at the right time and in the right place, in other words as we would spontaneously think or imagine it.
The Eastern tradition is more sensitive to the totality of the mystery regardless of chronology or geographical location (on the one hand, icons transport us beyond space and time). Here, we are dealing with a door open to the whole mystery of the Word made flesh: a spotlight on the mystery of the Incarnation. It's a bit like theology in pictures! 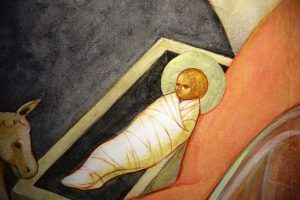 We can contemplate all of these here: the birth, the presentation, the ministry of salvation... up to the dark abyss from which the light stands out, up to the manger represented in the shape of a tomb (it looks neither like a manger nor a cradle), the bands that swaddle him like a shroud. The Resurrection is also announced: the tomb is open and Jesus is overflowing with the sarcophagus: "Behold, I open your tombs; I will bring you up from your tombs, my people" (Ez 37:12).

This is the whole mystery of the Incarnation from its prefigurations in the Old Testament to the Resurrection of the Lord.
Some links with these prefigurations of the Old Testament:
- the cave - mountain recalls many manifestations (or theophanies) of God. For example, Moses and Elijah to whom God revealed Himself both on the mountain and in the hollow of the rock.
- the star reminds us of Balaam's prophecy: "I see him, but not for now, I see him, but not up close: a star from Jacob becomes ruler, a sceptre rises, from Israel" (Numbers 24:17)
- the animals refer to the prophet Isaiah: "the ox knows its' Lord, and the donkey of the manger of his Master" (Is 1:3). 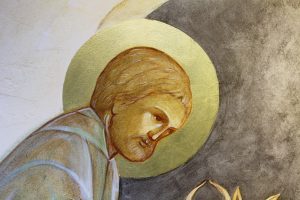 At first glance, we see that Mary and Joseph do not have the same mission in relation to the Mystery of the Emmanuel. They both surround the Child Jesus, but in a different way.
Joseph is dressed in a brown garment, a reference to the "skin garment" of sinful humanity. At the left end of the back wall, he represents humanity waiting for salvation. At the other end of the wall, Christ, shining with glory, came to take this humanity on his shoulders and make it sit on his throne of glory.

St Joseph is at the same time the meditative and contemplative man, the watchman and the guardian. He is simply there, prostrated before his Lord. It reminds us of all those prophets of the First Covenant, the watchers of the Most High, the Servants of the Word.

With Joseph, we find Moses hiding in the shade of the rock, asking God: "Give me grace to see your glory! "and the Lord said: "I will make all my beauty pass before you and I will pronounce before you the name of the Lord (...), but you cannot see my face". The Lord had passed before Moses hidden in the hollow of the rock, but from behind, while proclaiming: "Lord, God of tenderness and mercy, slow to anger, rich in grace and faithfulness".
What God had proclaimed and Moses had not yet been able to see, Joseph, today, contemplates in silence.

With Joseph, we also find the prophet Elijah, who at one of the most important moments of his life also stands at the entrance of the cave and, at the moment when he perceives the light breath, signs of the humble presence of the Almighty God prostrates himself and adores.
Joseph watches over the Child and the Mother and continues to watch over the Church, which never ceases to give birth to the sons and daughters of God. He continues to look after the Community and each of us.

The Mother of God : 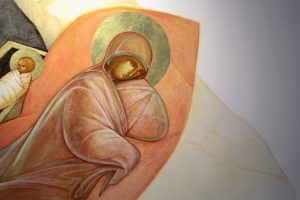 The way Mary is represented can also astound and even shock us. We could have represented Mary simply in the Western way, as "the Mother of the Child Jesus", in the attitude of all mothers. We preferred to evoke "Most Holy Mother of God". Why? Why?

Having this fresco before our eyes all year round (and not only for Christmas Season), we have chosen to offer much more than just the Christmas event for contemplation.

In fact, the Mother of God is here much more than "Mary at Christmas".

It is Mary who:
- Summarizes all Israel's expectations
- Is associated with the totality of the Mystery of the Redemptive Incarnation
- Is already the figure of the Church.

So it is the whole mystery of Mary that is revealed to us.

Whatever Marian mystery, each one is always associated with the mysteries of Christ... and we can meditate on them and pray to them before this fresco. Whatever the Marian liturgical feast, we can celebrate each one by contemplating this scene... because it is not Christmas... it is not only Christmas! One can even find a source of inspiration and a help to pray the Rosary whether they be the Joyful, Light, Sorrowful or Glorious mystery.

Indeed, the Glorious mysteries of Mary are already present, in particular the last two mysteries: the Assumption and the Coronation of Mary. Mary is already here in glory. She lies on the imperial layer of red colour. This is what St. Epiphanius says in one of his homilies: "Rejoice, most Holy Immaculate Mother, you have begotten Christ who precedes you; rejoice, royal purple, you have clothed the King of heaven and earth. Rejoice, impenetrable book: you have given to the world to read the Word, the Son of the Father.

She is on the side of humanity, but unlike Joseph, she is already transformed. Mary represents humanity already redeemed. We could have dressed her in glory; we preferred to recall that she is indeed one of us (cf. the brown colour that we can guess in her clothes). She is not divine by nature; she is divinized by grace. She is the first to have, by pure grace, washed her garment in the blood of the Lamb

Jesus is surrounded by a perfect mandorla of glory, a sign of his divinity. Mary is surrounded by a red mandorla, a sign of humanity redeemed by the blood of the Lamb. On one hand, the divinity of nature (the glorious Christ), on the other hand the divinized humanity.
Mary is already presented as a participant in nature and divine glory, because she is already redeemed, in advance, in the blood of her son.
Thus are present the two mysteries that mark Mary's earthly existence: the Immaculate Conception and the Assumption, as well as the central mystery that conditions the other two, her divine Motherhood.

We notice that the mystery of this divine motherhood already extends to the new birth of Jesus' brothers and sisters - who we are. The fresco gives the impression that Mary is once again about to give birth, as if, in reality, this childbirth had no end.
I remember one of our sisters who had trouble "entering" into this representation of Mary, saying: "I don't feel like I'm facing a mother... she doesn't really make me want to go snuggle under her cloak! "and continuing, after a moment of silence: "That's it, I get it... I don't need to go... I'm already there! ». It is true, Mary has already taken us into her womb. She is the Mother of Emmanuel... and she has already taken the whole Community. We then can say "We freely give you the right to deal with us and everything we have, as you see fit, for the greater glory of God, both now and for eternity. Amen."

The Creation renewed :
All of Creation is called together to celebrate this great mystery. God becomes man to renew and reconcile all Creation from within.
Among these natural elements, the first signs of the new Creation, we contemplate the star, a sign from heaven that makes the link with the celestial world, but also earthly elements that are representative of the different kingdoms: the mineral kingdom (with the cave), the animal kingdom (with the ox and the donkey), humanity (the Holy Family)... and even the vegetable kingdom (since the strips of cloth of the Child Jesus, like the Holy Shroud, are probably made from flax).

"The Virgin today gives birth to the Lord and the earth offers a cave to the Unaccessible. The angels and shepherds praise him and the magi with the star come forward. For You were born for us, little child, eternal God" (Saint Romanos the Melodist).

"What shall we offer Thee, O Christ, Who for our sake has appeared on earth as man? Every creature which Thou hast made offers thanks. The angels offer Thee a song. The heavens, their star. The wise men, their gifts. The shepherds, their wonder. The earth, its cave. The wilderness, the manger. And we offer Thee a Virgin Mother!" (Nativity hymn)

This beautiful fresco in the chapel was created by Suzanne Kent.  Suz, from the Emmanuel Community (USA), went back Home to the Father on September 15, 2018 she was 45. We want to give her hommage and give thanks for her life as well as the icons she wrote in this chapel (and other chapels).